That time of year again, and good news from the AGM down in Aldershot for one member of the Fence Houses team.
The last posting here was about Simon's model of Wapping Bridge Signal Cabin, and guess what? Simon was awarded the Malcolm Stone Trophy. We liked the box anyway, but now Simon has the icing on the cake.
9F's breeding? Well that's what the comment was in the 2mm Magazine for August-September 2011. See the magazine photo of the two locos built by David Smith of Essex, from the FHMF kit. I hear that David won The Groves Trophy for one of them, so well done David (maybe I'll get round to finishing my own second one now!)
Talking about finishing things, we have been working on the layout (no, it's not 'finished' yet) after the Blyth show last August, but what with various illnesses in the team, plus a general slowing down due to lethargy and old age, well at least for me, we have still a way to go to where we want to get to. However, we have the Newcastle show at Gateshead International Stadium in just under three weeks now (12th-13th November) to look forward to, so no doubt the adrenaline will come pumping back in time to fire us all up again. Hope to see some of you there.
One thing I have done since Blyth is resurrect the prototype build of the Black 5 kit that had been languishing on the 'damaged' shelf, following a serious wheel slip and a bending of one of the coupling rods. I was expecting a complete strip down of the chassis to put things right, but was amazed at the fact that I just pushed all the wheels back in to 'quarter', and force re-bent the offending rod, to produce a 99% acceptable situation. I suppose my 'just go for it' attitude helped, as I was not expecting it to work, and nothing would have been lost anyway. See the attached two photos, which shows the loco still unpainted of course, despite chivvying from certain team members. Sorry, but I just like the gleaming brass fittings, nickel silver and white metal....... even at an exhibition. At least people can see the origins of the thing, and that it's not just another Chinese import (superb as they may be these days). 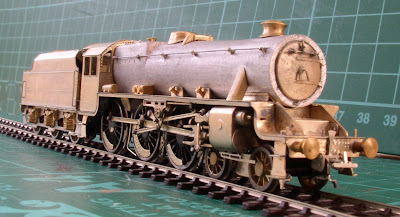 Finally, how not to handle your expensive DCC chips!
It's been a long time since I dismantled a Mashima motor to clean the commutator of carbon, and on re-assembling the parts, it's important to remember the insulating washers go next to the steel body, not on the outside of the wire contact strips/brush holders! 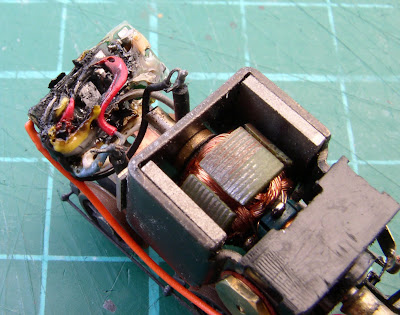