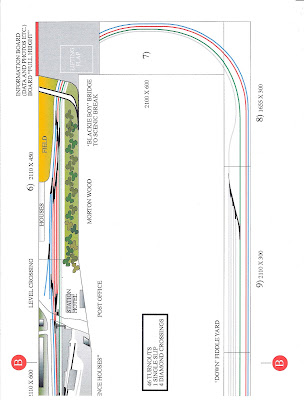 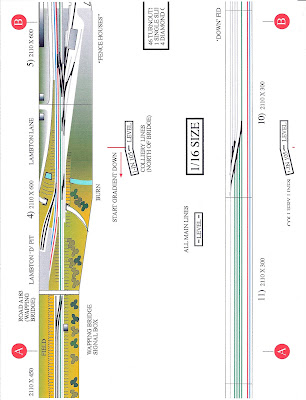 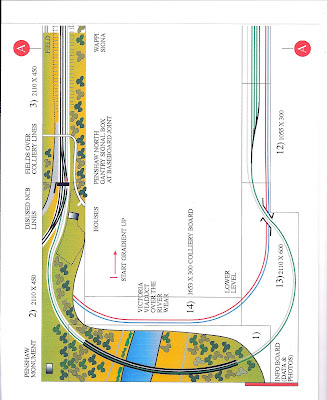 I'm posting the layout plan here for the first time. It's in three parts, which can be cut out and joined at 'A' and 'B', to give the full plan (38'-6" x 9'). Originally it was 'only' 37'-0"long, but we have extended board 6 by a further 18", and because of that, board 12 also to match. Most of the track layout worked as planned, but the final stretch before reaching the end board 7 just ran out of space.
With a layout this big, what does an extra 18" matter!
At the viaduct end, compare the plan with the photo from my posting of 25th February 2009.
A lot of the latest track used is Easitrac. On the previous post this is much in evidence, coupled to the F.H. etched chairplated pointwork system. There are quite a few 'one off' shaped turnouts on view and it has all worked out quite well.
Note the track at the ends of the boards is all soldered construction. 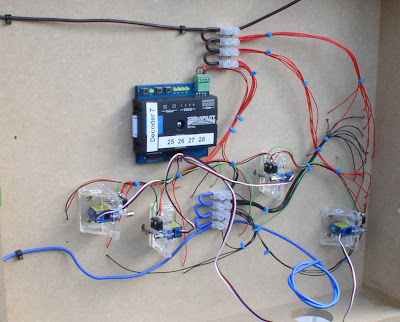 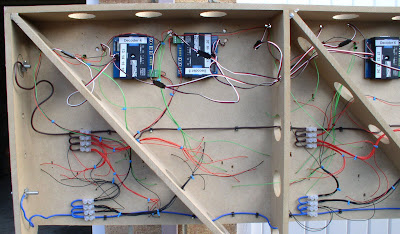 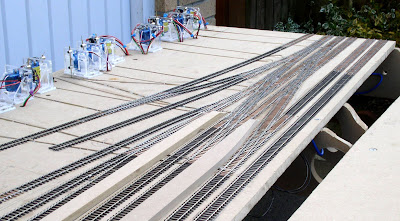 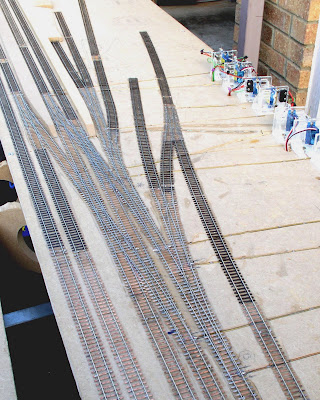 Seeing the name Fence Houses in the February 2mm magazine really brings it home. Less than 5 months to go and still so much to do! I've said from the start when asked to bring the layout to Oxford that it will not be finished, far from it, but at least we're on the final few boards now with the track laying and electric's. Finishing the Black 5 project meant I was not able to meet the target for completion of track laying by the end of 2009, but with a layout nearly 40ft long you can imagine how much is involved. Anyway, what we have is looking good, though by Expo time there will still be little scenic treatment started. As for the trackwork, how is it all wired then? Well as we all know, with DCC "it's only two wires". Oh really? Have a look at the underside photos of the main station board and judge for yourself! We have in total some 50 turnouts, diamonds and single slips on the layout, mostly now installed and wired up to my ESU Ecos controller, with it's 'touch screen' technology. Les Waters, one of the original F.H. team from the 'N' gauge version of 30 years ago, has all this is in his very capable hands, thank goodness! We are now using the point motor kits from South West Digital Ltd (usual disclaimer) http://www.southwestdigital.co.uk/ (click on point motor control) in conjunction with the ESU Switch Pilot Servo, and this is proving to be a very worthwhile investment, although for now we are leaving in position the Tortoise motors previously installed on the first couple of boards already wired up. It will be interesting to see the comparison over the coming months and years of operation! As can be seen, some of the SWD point motors are on top of the station board and will be out of sight behind the backscene when this is fitted later. We did this for ease of access for any adjustment in the initial setting up, and for any that may be necessary later. This location aspect also helped due to congestion of pointwork, especially at this northern end of the station area. At the southern end the four servos can be seen fitted underneath, with the decoder that operates them via the Ecos controller.
What you will see at Expo, will in effect be a giant test track, with the operating team very much on a learning curve. We shall be very pleased if it all just works without any serious mishap!
What we intend to attain eventually, will take a lot more time and effort.
'Completion' is planned to be in August 2011, at the 50th anniversary show of The North Eastern Railway Association. This is to be hosted by the Blyth club and will be held at North Shields, Tyneside. It promises to be a very special event indeed, as we have some quite iconic layouts (in various scales and periods from pre-grouping through to BR) in our sights!
Fence Houses then has a second outing at The Newcastle show (Gateshead International Stadium) in the following November. So, you can see that after the 2mm Expo, we have some breathing space to get into place the scenery, signals, buildings and all the other hundreds of things needed to 'complete' the project.
In 2012 the NE area group will be 30 years old, so we might even get an invite to that as well!
Mention of buildings reminds me. I intend to use at least for starters, the Plastikard buildings from the original 'N' gauge layout. Considering their age the condition is very good, and of course the time saved in using them will be most welcome!
We have amassed quite a few 'N' coaches now, some with turned down wheels (thanks Mick!), and even a few main line diesels and a couple of DMU's for conversion. Steam traction will be converted to DCC as time permits after the track laying is finished, and Chris Mills is very busy making what seems like thousand's of 21t hoppers and 16t minerals for us to borrow.
If anyone out there has a DCC loco they would like to see 'stretching it's legs', on what is probably going to be 'the biggest 2mm finescale layout in the world' (!) then make yourself known beforehand, and you may well find your offer accepted. On the day we intend to have a separate test track / loading gauge available to try things out prior to letting anything lose on the layout proper, just to be on the safe side!