Another end of year report (Black 5 kit this time) 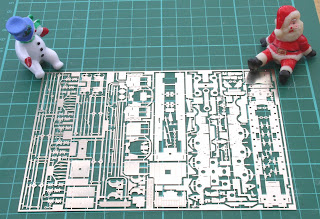 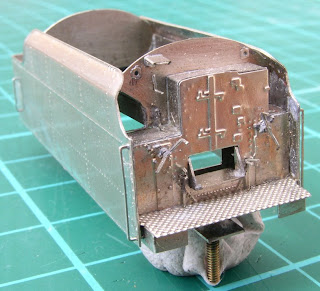 Strictly speaking the Black 5 kits are of course The Associations project, so were not included in my previous posting. However, I have now agreed with the powers that be that we can release some photographic evidence of what we've been up to over the last year.
Firstly an apology from me for the delayed completion date, which was aimed provisionally for October just gone. I just got involved in too many etching contracts.
Anyway I'm now back on the modelling bench, having just received the first test etch for one of the loco variants, and the next two to three months should see my design and casting master production element complete. It will then be down to the etchers and casting manufacturers to come up with the goods, not to mention our heroic shop keeper(s) who will have to supply the other bits and parcel everything up etc.

The other photo is of the etch of the loco parts, some of which will not be present as etches in the kit, as the intention is to make them up for use as masters for casting purposes.

I hope this posting will please those of you who have placed orders with The Association, as we all look forward to a successful conclusion to the project.

Did you know........... I have a photo of a Black 5 hauled train in Newcastle Central, after arriving from Liverpool and substituting for a failed diesel.
So I will be able to use the trial build on Fence Houses after all!

Seasons greetings (again) to all.

Despite little being reported here over the last couple of months, the team have been beavering away on the 'Fence Houses' layout trackwork, wiring and fitting of Tortoise point motors. The latest board to be completed with these items is the 'colliery' board, which leads into the main station area, where some interesting pointwork formations will be required.
David and Simon are currently on with a couple of curved turnouts for the goods yard, and Les and yours truly have been engrossed with wiring and testing the DCC functions required (well Les has, I'm just the apprentice here).

Three of the boards (21ft) were recently set up for a local North East finescale group meeting (2mm to 7mm interests), and Mick pointed out how little impression my total stock made on the scene!
Even the sight of the 9F, pulling (amongst other items of stock) my four NER pre-grouping liveried coaches could not improve the view, and I have now acquired some more (BR) coaching stock for conversion to finescale.

Victoria was also on view in the garage, for some of the group attending the event who had not met her before, and to finish this last posting of the year, I thought this shot of her complete with Chris Mills's very nice builds of my 21t hopper kits would do very nicely.

Victoria is on her own in terms of finished scenery cladding to date, but I'm determined the layout will be joining her within the next 3 years. It's all getting quite exciting now, after all the 'planning' and daydreaming years since the 'N' gauge version.

All the very best to one and all for Christmas and the New Year.