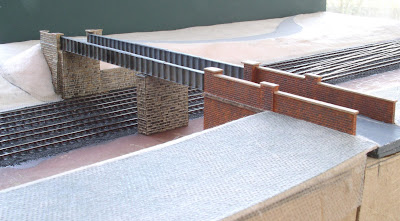 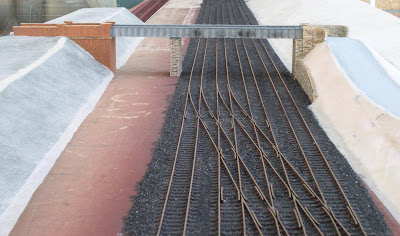 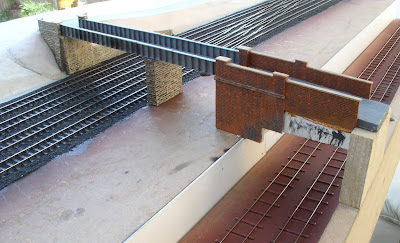 This slightly unusual bridge is situated just a few yards south of Penshaw North box, which featured in my last couple of postings. Well it seems unusual to me, because of the mix of masonry materials used. I'm guessing, but it looks like The North Eastern Railway built their side over the four track main and relief lines part in the more pleasing (and presumably expensive) stone, whereas the colliery lines made do with a more economical brick version for their part of the structure. As used on the previously mentioned signal box, Slater's Plastikard has been used for the brick and stone work. In reality the actual bridge metalwork seems to have been in two parts as well. Though indistinct, photographs appear to show a different design for the platework for the two sections. Again, the colliery span differs, and seems to be provided with fewer strengthening uprights on the sides. Regardless of this I've etched the whole span in one design as shown here. Note the colliery lines on the layout are to be out of sight under the embankment on this baseboard, and also partly out of sight on the two adjacent boards as well. One photo shows the situation without the removable embankment section in place. The other photos show the embankment in place. The colliery lines are diving down to pass under the main lines here, so that they are out of sight by the time the main lines reach Victoria viaduct, which caters for only the up and down lines. On the photo looking south along the lines, the track to Low Lambton Farm can be made out coming off the bridge on the right hand side, while on the left hand side you can see where we are to represent the actual Lambton railway colliery lines, lifted and abandoned. Apart from the bridge and masonry, it's obvious that much scenery and greenery has yet to be done, but we are getting there, and we should start using the electrostatic grass applicator soon. Some of you may be interested in the fine gauze type netting we have used to cover the polystyrene and removable embankment sections in. This was bought from Aldi about a year ago, and was sold as winter protection for vulnerable garden plants! Applied using pva glue (before and after laying in place), it sets and gives a finish when dry, a bit like fibre glass. Seems ideal for painting with enamel (nothing water based obviously due to the previous application of pva), and should be ideal for our requirements.
Happy New Year, Bob.
Posted by Bob Jones at 06:13 No comments: