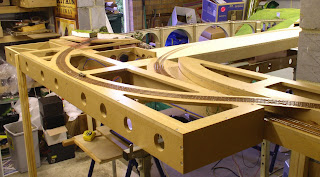 Baseboard 14 has just been completed. This is the last board to be made for the layout, and can be seen in place behind Victoria viaduct in the photo. The tracks on this board are the up and down colliery lines, which at this point are 35mm below the height of the main lines on the viaduct. The backscene (not in place on the photo) separates the viaduct from the colliery tracks, so these will not be seen in normal viewing mode at exhibitions (assuming we get an invite to one!)
Trackwork is now some 65% complete for the whole layout, with significant progress having been made lately, when compared to the previous 25 years! The regular Wednesday "Fence Houses" days have been a great boost. Thanks Les, David and Simon.
The introduction of Easitrac has not yet had it's full impact on F.H. as we have been re-wiring and fitting DCC components to boards previously started and conventionally wired for DC. However, the 'colliery' board, immediately north of the station board has been Easitrac fitted, and sufficient stocks now mean we anticipate completion of all trackwork by the end of 2009.
We have in fact stopped tracklaying in the southerly direction towards the station area for the time being, and have headed north and back over Victoria and onwards into the fiddle yards, the start of which can be seen in the lower foreground of the photo. The reason for the change in direction being that the plain copper clad and strip rail used here can be laid and completed whilst we are on building the etched chairplated pointwork configurations in and around the station areas.

Just a few shots of work in progress on the first test build for those of you signed up the kits.
Most things on the etch (see previous posting) have worked fine but one or two didn't and have been redesigned to make things easier for the builder. Also now done are most of the casting masters for the various boiler fittings (but not yet the boilers themselves), although I've taken advantage of the second (hopefully the last) test etch, to include some more small items that will be incorporated in such things as the masters for the different types of top feed employed on these locos.