Penshaw North Box - The Dark Side 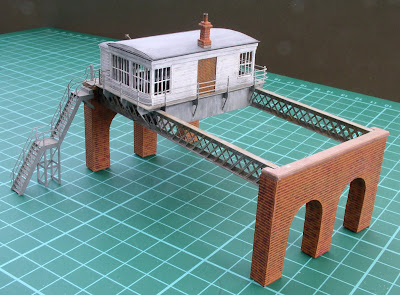 Like our nearest celestial neighbour, this is the side you wont ever see....... unless you are an operator on the layout peering over the top of the backscene.
Forgot to include this view in yesterday's posting, so two postings in two days!
Also forgot to include any build details in the previous missive. The whole thing, excluding the brick base supports is an etching in my normal 0.25mm thick nickel silver . The brick wall under the chimney in this shot is also part of the etch. The box itself comprises the main three layers, representing the front and rear 'sliding' windows (which don't) and the outer framework 'wood' parts. In addition at the top, is another overlay representing the barge boards and guttering. The main roof is half etched and rolled to shape prior to soldering on (slots and tabs for location). There is some internal detailing in progress, such as the lever frame, table and chair etc. but I have not yet started the glazing........ should be fun! After all this is finished the box will be permanently secured to the floor. There will be the operating wires to run down the inside of the wall of course, but I'm not sure how far we'll go with the point rodding yet. One of many detailing jobs that will need tackling sometime. All Handrails and posts are etched to shape. I know some people don't go for this as the sections come out square as opposed to round. The brick bases are in 4mm scale embossed brickwork Plastikard. I don't mind these scale deviations, as from NVD (normal viewing distance) they are hardly if ever noticed. Be honest, like the over scale brickwork, did you really notice the square handrails before I told you? If you did, bear in mind the enlargement of the photos. The four layer thick support girders for instance are 110mm long x 10mm high, and the brick supports are 40mm high. Drop the sizes down to these figures and take another look.
I've spent quite some time on the painting and weathering. Anyway, I pleased with it, though I'm no Mike Raithby!
No modelling yet today, as I've been out on the shovel again this morning in readyness for the weekly get together tomorrow. From upstairs it looked like just a cm thick, but when I tackled it it was more like 3cm, plus the ice my neighbours over the road had left me to clear up after their departure for the daily grind. It's so much harder to shift after it's been compacted!
Talking of tomorrow, we're hoping to get a first try with the two newly acquired ESU radio control handhelds for the ECoS. Another learning curve! At least we will be in the warmth of the house instead of the garage.
Bob.
Posted by Bob Jones at 05:07 No comments: 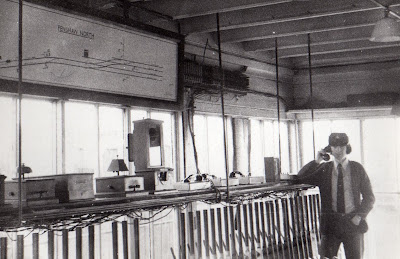 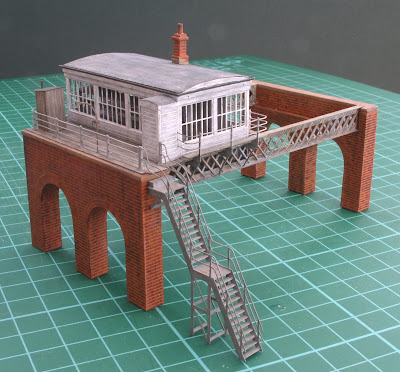 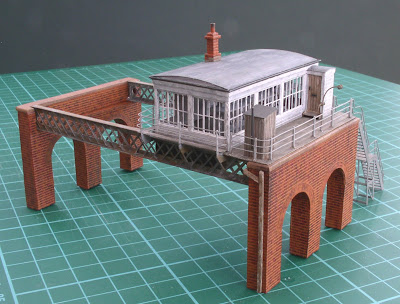 The rather excessive snow around the North East having curtailed various other activities, has at least kept me fit with all the shovelling, and has enabled some progress to be made with the box. As an appeasement to the villagers of Penshaw and it's station (located between Fence Houses and Victoria viaduct), which have for space reasons been omitted from the layout, I have at least made a decent effort to model the overtrack signal box at the junction. The box spans four tracks here, and was kept busy even in the late 60's, according to one of the signalman, Neville Whaler.
Nev has sent me loads of photos of the box (one of himself at the controls is above), along with various shots of just some of the adjacent lattice signals. Lots of etching work to do now to get this lot incorporated on to the layout!
The box is not fully fitted yet, so still a few hours more work to do on all the bits and pieces, but nearly there.
Note the outside 'netty' (NE for toilet) and the little crane for hauling a bucket of coal up to the box. Apparently it was safer than going up and down the stairs!