Some weeks ago I saw a few photos of Jim Watt's build of some 2mm scale wagons, one of which was in the Fence Houses Foundry livery! I've wondered for some time what that would be if I ever got round to doing it, but Jim has beaten me to it. Interesting load Jim, they certainly look like foundry castings. 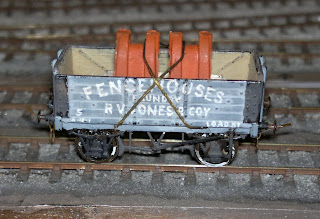 This next shot shows the same wagon as part of a rake of Jim's further output. It would be nice to welcome the wagons on to the layout one day, and as we were asked last year to attend the 2014 Glasgow show (to be confirmed), then maybe we can see them on Jim's home territory, even further 'up north' than we are!